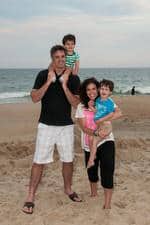 Reed Libby is a native of Northern Virginia.  He graduated from WT Woodson High School in Fairfax, VA in 1992.  After high school, he ventured to Ohio to obtain an undergraduate degree in Spanish at the University of Dayton.  His junior year was spent at the Universidad de Andres Bello in Granada, Spain.

Shortly after graduating from undergrad, Reed received a unique opportunity at Wright State University’s MBA program to do an internship with a small electrical material company in Temuco, Chile.

After completing his internship in Chile, Reed accepted a position as a Financial Planner at Virginia Asset Management in Richmond VA.  Four years later, he co-founded a technology company with a former client.  Collectively, they raised over $12 million dollars in venture capital and developed an innovative software solution for the automotive industry.

In January 2002, Reed received a scholarship from the College of William and Mary’s MBA program.  Shortly after enrolling in their program, Reed partnered with his childhood best friend, Ryan Muniz, to start a lawn sprinkler business.

He also has a strong passion and commitment for outdoor lighting, he personally designs and oversees his larger lighting projects.  He has attended various seminars by Kichler, Vista, Cast and Uniquelighting companies throughout the United States.